Many drivers have a hard time putting down their phones when they’re behind the wheel. Distracted driving is one of the most common reasons for getting in an accident, and in many of those, the distracted party is looking at their phone for many reasons. In order to help curb this problem, many new vehicles have added screens and other features that can help drivers stay connected and focused on the road.

While these features are exciting for drivers who are buying new cars, those who are looking for a used vehicle may feel like there is no way that they’ll have access to features like that. However, many models, like the Nissan Sentra, have had infotainment systems available as early as 2010. Those who are searching for an older used model may have a more difficult time finding a vehicle equipped with a Bluetooth® system, as they weren’t standard equipment at that time, but it isn’t impossible.

Which used car models might have Apple CarPlay® and Android Auto®?

While infotainment systems are quite impressive, and can do a lot for keeping driver’s attention on the road ahead of them, there are some drivers who would rather use a system that provides a similar interface to their cell phone, as well as many of their favorite apps, which might not be available on the manufacturer’s interface. This is where Apple CarPlay® and Android Auto® come into play. Drivers can use the systems that they are used to by downloading the app and connecting their device via USB cord.

Many manufacturers have just started adding Apple CarPlay® and Android Auto® to their systems, but that doesn’t mean that used car buyers can’t find them. There are many vehicles from 2014 or 2015 that were equipped with Apple CarPlay® or Android Auto®. 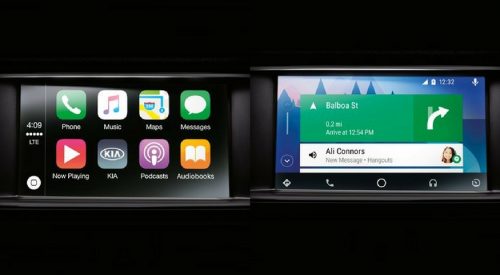 Find a used vehicle at OkCarz

These are only some of the models that are available with Android Auto® and Apple CarPlay®, and many of them may also have Bluetooth® connectivity or other interfaces on even older models. To see all of the vehicles available at the five OkCarz locations, visit the inventory online, and find information about other technology features and used vehicles on the OkCarz blog.

Which Cars Were the Most Affordable for Drivers in 2019?

Top technology features to look for in a used car

What are the Most Fuel Efficient Pre-Owned Cars?