If you’re looking to save money on your daily commute, Toyota has designed a built a vehicle just for you. The Toyota Prius is one of the most famous Hybrid cars in the auto industry and rightfully so, as it offers an incredible fuel economy rating on both the highway and city streets. With money-saving fuel efficiency, the Toyota Prius has become a top choice with drivers who want to save money on gas. The following information will help you get a better idea of which used Toyota Prius model you’ll want to buy by showing you the fuel economy rating of many different engine options and model years of the Toyota Prius Hybrid. 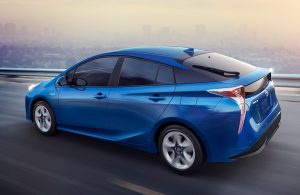 The Toyota Prius is one of the most fuel-efficient used cars in the auto industry. It is famous for delving money-saving fuel efficiency on the road and for having an interior that is loaded with technology features and comfort options. Over the years, the Toyota Prius has been available in many trim levels, but no matter which one you choose, you’ll get an incredible fuel economy rating that will help you save money at the pump. In recent model years, the Toyota Prius has offered multiple engine options with each of them delivering impressive mpg ratings. The following list of available engines will give you a look at each of their fuel economy ratings so, you can find a used Toyota Prius Hybrid that offers the mpg rating you need.

1.8-liter Four-Cylinder – In recent used models (2016-2018), the Toyota Prius offers you a 1.8-liter four-cylinder engine and a pair of electric motors that work together to push out 121 horsepower to the front wheels through a continuously variable transmission (CVT).

1.8-liter Four-Cylinder – Used Toyota Prius models from 2010 to 2015 use this engine to deliver a combined 134 horsepower. It also sends power to the front wheels through a continuously variable transmission (CVT).

[You May Also Like: Toyota Corolla Fuel Economy Rating]

Which Sedans Have the Best Fuel Economy Ratings for 2019?